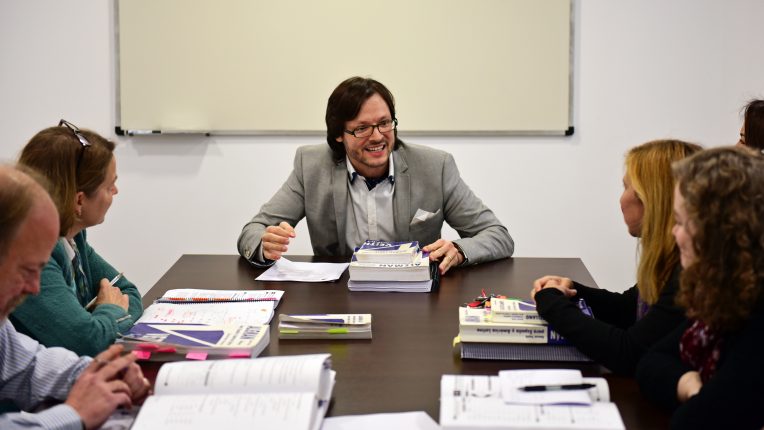 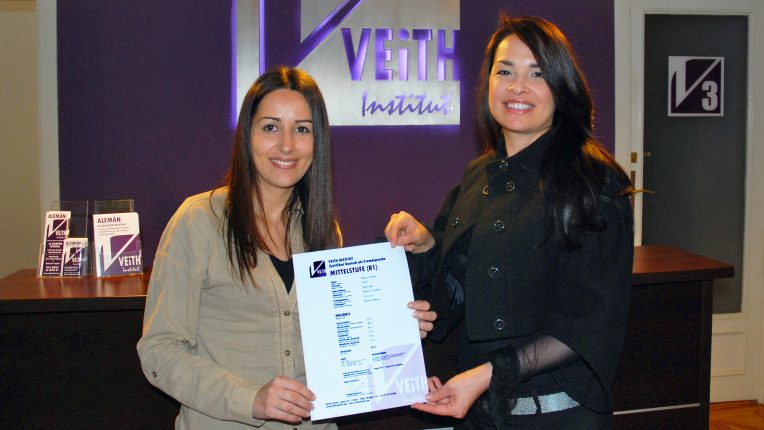 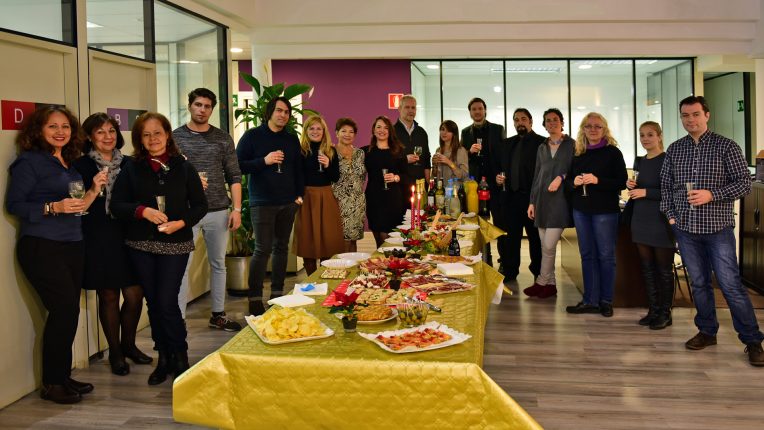 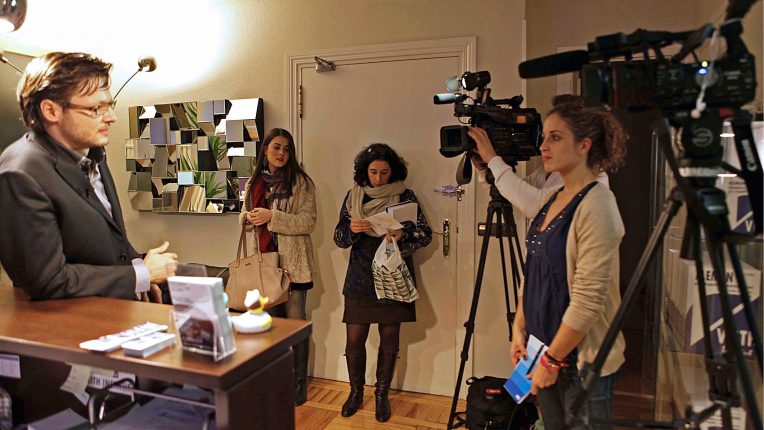 To manage, organize, enhance and, above all, multiply their various activities, Daniel Veith and his wife Evelyn Veith began to create, from 2010 onwards, several trading entities that soon after gave rise to VEITH Group.

Currently, this business group with headquarters in Madrid / Spain consists of 20 educational, cultural and commercial institutions and has branches in Spain, Germany, Malta and Costa Rica. Read a brief history of VEITH Group here.

Daniel Veith begins to develop the VEITH Method as a personal system of rapid, logical-systematic and highly effective learning in his self-taught language studies and as an «express» preparation to pass exams for his school career.

First use of the VEITH Method in private language classes taught by Daniel Veith in Germany and later in different countries of Latin America.

Application and improvement of the VEITH Method during the residence of Daniel Veith as a lecturer of German Philology at the University of Salamanca in Spain.

Foundation of the LING/K cultural association, dedicated to the study and documentation of minority languages and the publication of books and informative material on the subject.

Foundation of ILLUSOMNIA PRODUCTIONS, independent producer of films and television, to make the feature film Dawn in Sodom.

Foundation of TOP IMAGE FACTORY, adviser on corporate and personal promotion, initially to manage the costumes, make-up and set design of the film Dawn in Sodom, and then to represent foreign clothing brands.

Foundation of CREATENTION, advertising agency and event organization, for the promotion and commercialization of the film Dawn in Sodom.

Foundation of VEITH INSTITUT LANGUAGE SCHOOLS, language centers where German, English and Spanish courses are taught based on the teaching philosophy of the VEITH Method.

Foundation of GLOBALLIGENCE, a human resources agency dedicated to the training, recruitment and selection of executives, experts and technicians from different professional sectors. It is specifically aimed at the process of incorporating highly qualified candidates from Spain and Latin America into the labour market in Germany, Austria and Switzerland.

Foundation of VEITH ZERTIFIKAT, a system of examination and certification of languages for all linguistic levels, based on the most demanding and extensive evaluation regime currently available. The candidates’ performance is measured through the most complex, detailed and objective analysis of written and oral competence worldwide.

Foundation of VEITH R+D AGENCY, a research, development and innovation agency, considered to be the creative nucleus and the driving force of the business group, which deals with exploring new teaching concepts, creating programs and course content and the corresponding teaching material in conventional and virtual formats, in addition to supervising and enhancing the quality of the VEITH Method. 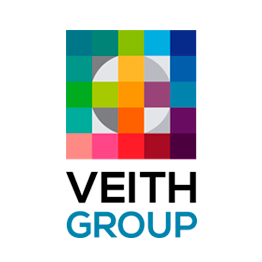 Foundation of a commercial entity in San José, Costa Rica, as a preparation for the future expansion to Latin America. This first foundation outside of Spain has been the basis for the creation of the VEITH Group business group for the utmost coordination of all the activities of each legal and commercial entity.

Foundation of ICB CONSULTING, corporate, financial and fiscal consultancy with focus prioritized on the organization of cross-border commercial movements and the optimization of business strategy at an international level between Europe and Latin America, specializing in binational commercial treaties and double taxation agreements.

Foundation of a commercial entity of VEITH Group in Malta, as a preparation for the establishment of a language institute and a research center on that island.

Foundation of LITAMORPHOSIS, the scientific, educational and literature publishing company of VEITH Group that publishes the books, manuals and teaching material of VEITH R+D Agency for VEITH Institut, the future VEITH University and the physical and virtual products of the other entities of the group. Sales and marketing is done through the Litamorphosis online store.

Foundation of WORKERY, network of business centers and rental of spaces, classrooms and offices for co-working, expos, classes, workshops, events, businesses, conferences or congresses, thought to be the ideal and competent partner to realize the professional, educational or artistic aspirations of the client with a high level of commitment and exclusivity, all inspired by a cosmopolitan, multicultural and avant-garde environment.

Foundation of CLOISTER CONVENTIONS, an internal school that provides intensive and continuous training for teaching staff, examiners and researchers, guided by the VEITH Method. The name «Cloister Conventions» has been chosen as reminiscent of the monastic schools of the Middle Ages, the origin of the first universities and, as such, of modern European education.

Foundation of VEITH TRAVEL, an exchange agency specializing in the coordination of educational tourism for students of all ages, in order to complete a language course or a study residence and/or work placement as a professional or researcher abroad. It manages all facets of the trip such as the educational and leisure program, accommodation and maintenance and also provides these services for groups and corporate clients.

Foundation of VEITH.TV, an Internet television channel that complements the study by the VEITH Method through didactic videos, virtual master classes, reports, socio-cultural documentaries, teleconferences, interactive learning material and exercises, adapted to the modules and lessons of the courses taught at VEITH Institut and the future VEITH University.

Foundation of DESCANSO PARA EL ALMA («Rest for the Soul»), consulting of emotional therapy for inner health, carried out by graduated advisors of individuals, couples and relatives, and with 35 years’ experience in the USA and Costa Rica.

Foundation of ECCLESIA PLUS, support and auxiliary services for Christian and spiritual communities, including the rental of equipped spaces, design, advertising and administrative management.

Foundation of VEITH AULA, department of supervision and integral control that monitors teaching quality and the correct teaching of the classes according to the guidelines of the «Vademecums» (the didactic scripts of the VEITH Method) in real time, and monitors the students with oral and written daily evaluations, supported by a novel online application, developed by VEITH R+D Agency.

Foundation of KINDERLINGUA, German and English courses, summer camps and extracurricular activities for children, based on the perfect mix: language, culture and nature, with the teaching support of the VEITH Method, in a first adaptation for Spanish-speaking students from 4 to 10 years.

A short history of VEITH Group

The origins of VEITH Group date back to 2008 when Daniel Veith and the Costa Rican economist Dr. Evelyn García met at the University of Salamanca; he being a professor at the Faculty of Philology, and she as a researcher at the Faculty of Economic Sciences and Business.

García, with an MBA, a second master’s degree in e-commerce and a third in market research, has an extensive 15 years’ experience in the business world as director of commercial strategy for several companies in Costa Rica and Spain and 5 years as a researcher of economy and innovation.

With the purpose of having their own company, García convinced Veith not to waste more of his time in the stagnant monotony of the university. Veith, a harsh critic of the archaic concepts of traditional teaching and research from the beginning of his academic career, accepted the call to adventure, both combined their synergies and created, based on Veith’s artistic talents and García’s organizational skills, Illusomnia Productions, an independent film production company.

Parallel to their university obligations, they made Dawn in Sodom, a feature film about Latin American immigration in Spain, written, photographed and directed by Veith and produced by García. As a result of this initiative, other activities related to the production company emerged, such as the image consultancy Top Image Factory, the advertising agency and events organizer Creatention, and the editing of books, an early version of the subsequent commercial publishing house Litamorphosis.

After 55 days of filming, 14 changes in the cast, an act of sabotage and aggression on the set and more than 60 hours recorded on tape, all carried out with the support of a network of cultural organizations, Veith and García saw before them the decision either to edit the film and release it without sufficient funding for a large-scale screening, or interrupt the project and dedicate themselves to fundraising, to publish the film internationally in a manner more in keeping with the immense work that its production entailed.

Rejecting the conventional tactic of independent cinema to concentrate all their efforts for years simply «knocking on doors» to raise some money and then forever depending on the will of investors, Veith and García were convinced that the only way to continue producing movies and other artistic and cultural projects was to achieve absolute «independence» in financial matters and, therefore, sought a strategy of self-financing.

What did they do? Veith and García started from the visionary ideas of a different education called VEITH Method that Veith has consolidated through trial and application for 10 years practicing as a professor and university researcher in Germany, Spain and Latin America. They took the courageous decision to abandon their affluent life and their secure jobs at university and move to Madrid where they founded, in the middle of economic crisis at the end of 2012, the first VEITH Institut, responding to the fast growth of the demand for German in Spain.

VEITH Institut has become a reference point in the Spanish educational field, as many language schools in the country, including the most recognized, have copied its system of courses. However, it is impossible to imitate what really makes the difference: its own and exclusive method, based on the mission and vision of an educational revolution.